Spend a few minutes at the playground watching little girls at play, and you will be surprised what you discover. As they go about their various social interactions, young girls will demonstrate all of those qualities that women seem to be lacking today. Self-esteem, loyalty and sisterly affection are all traits that somehow oftentimes get lost on the way to womanhood.

Most women caution their daughters to respect their friends and develop their self-confidence, but sadly those same women often do not think twice about criticizing their reflection in the mirror or talking badly about other women. While they may seem like minor infractions, it is these tiny teardowns that eventually lead to greater harm that can hold women back in their careers, relationships and personal development.

Despite great strides in women’s rights, there is still a lot of room for improvements regarding how women treat each other and themselves. From mommy wars to straight out backstabbing, it seems women truly are their own worst critics. Yet, it doesn’t have to be this way. In fact, just stopping these cringe-worthy behaviors can have a tremendous impact upon not just your own self-esteem, but also the future of all those little girls who look up to their female role models. 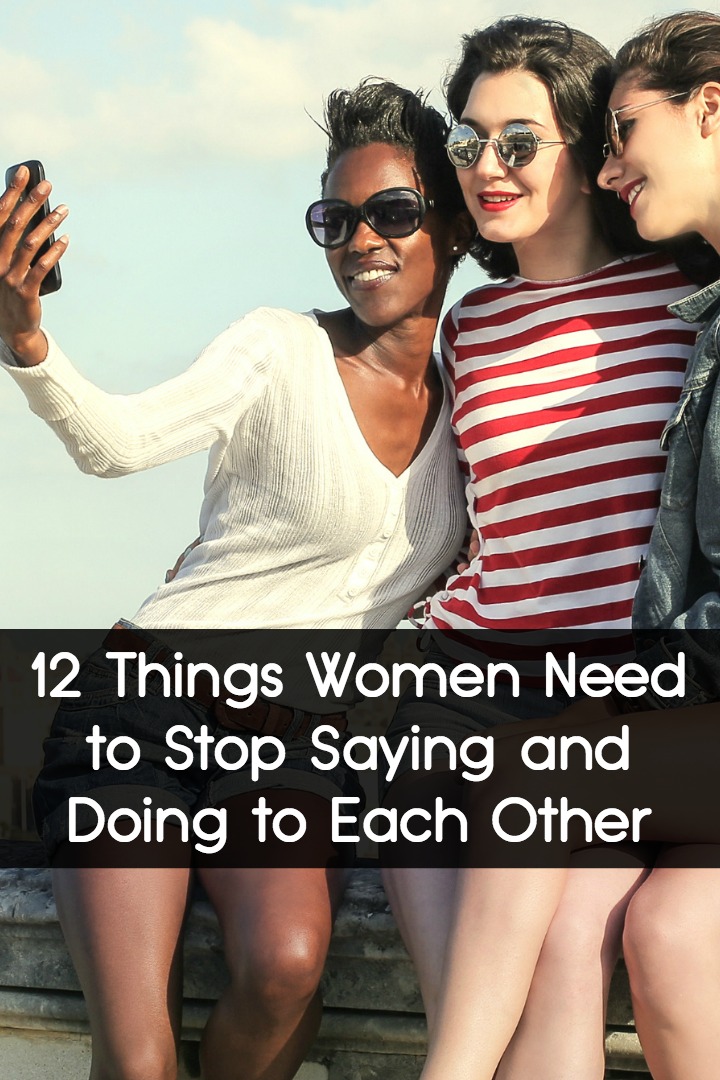 1. Saying, “You look great. Have you lost weight?”

On the surface, this looks like the perfect compliment. After all, who doesn’t want to hear that they look amazing? Yet, if your friend looks a little deeper, she may wonder exactly what you meant.

Are you trying to say she was fat before, and if she really did lose weight then did that mean she wasn’t pretty when she was heavier? Seriously, this so-called compliment just doesn’t stand up to analysis. Why not make a sincere compliment regarding something she has recently accomplished instead?

Other than the fact that it’s just plain rude, the “B” word tends to be used whenever a woman asserts her beliefs. Even if you think a woman stepped over a line, try thinking about what it is that got under your skin. Then, use that insight to generate a better understanding of her behavior that could stimulate a conversation. Simple name-calling never leads to positive change.

This statement leads to nowhere since absolutely no one will actually tell you the truth. Besides that, you should rock that outfit with confidence. Stop downgrading yourself, and wear that pretty dress because it makes you feel good.

It seems that once women hit childbearing age, this question never stops. Not only does it make it seem as though motherhood is the be all and end all of a lady’s existence, but it could potentially be painful to a woman who has struggled with infertility or the loss of a child. Some women are also perfectly fulfilled focusing on their career. Trust me, baby announcements are big news so you will be clued in should she decide to conceive.

Sadly, some women never grew up beyond high school and rumors abound about who slept with who in the workplace or has a husband who is messing around. The problem with rumors is that they are rarely true, and the majority focuses on the same slanderous beliefs that hold women back.

Women do not have to be in relationships to be fulfilled, and being single does not mean that a woman must be flawed. It’s completely possible your friend has plenty of options but would rather focus on herself for the moment.

7. Competing with each other

Life is not a competition, and weighing your accomplishments against other women’s will never play out well. When women compete with each other, no one really wins. Instead, women should celebrate what each person brings to the table that makes the world a better place.

Women’s bodies undergo tremendous change throughout the course of their lives, and there truly is not a perfect body type. While one woman may love her curves, another may wish she had more angles. Expressing envy for what another woman has will only lead to a major drop in your self-esteem.

Have you ever noticed that a lot of women’s conversations tend to revolve around their latest accomplishments? This is especially apparent on social media where it is easy to feel as if every other woman is living a fuller life. Instead of comparing our accomplishments, let’s try acknowledging the beauty and knowledge that we all contribute to society. Remember, it takes all kinds of skills to create a prosperous world.

10. Worrying about your age.

There is a saying that the perfect age is the one that you are, and that holds true. There will never be a better time than the present, so stop worrying every time your birthday rolls around. The belief that women are old after 30 has long been proved outdated.

When another woman has the confidence to confide in you, please keep it a secret. It’s not okay to make a vow of secrecy, and then tell even a few people. We all know how secrets spread, and trust between women should be viewed as valuable.

Listening to someone criticize another woman can often yield insight into what they dislike about themselves, and all this behavior does is continue the cycle of belittling women. No one is perfect, and we shouldn’t expect our fellow women to be so. Instead, focus on the positive traits that you find in others, and search for ways to help them shine.