12 Traits of People Who Are Truly Genuine

The people we spend most of our time with mean a lot. Nobody wants to be around fake friends; instead, we want to be with people who are sincere, real, or genuine. How about you? Are you real, too?

Below are 12 signs of people who are genuine–or how to know who in your circle is a genuine person or not.

Here are 12 Habits of Genuine People… 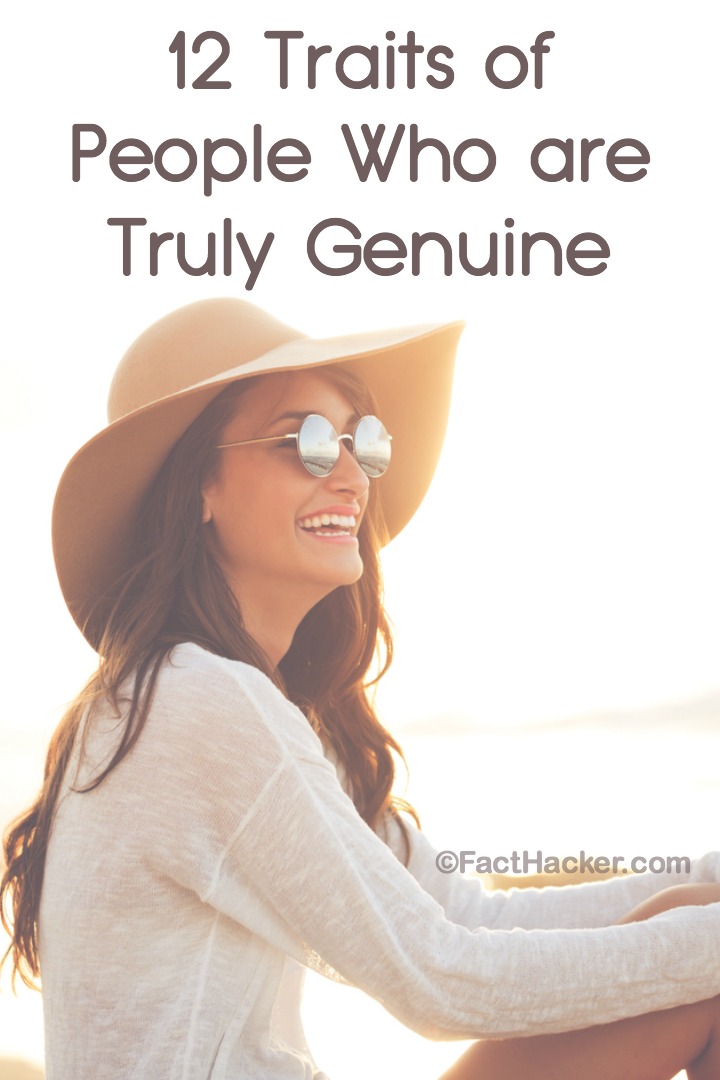 1. They tell the truth and nothing but the truth.

For genuine people, telling the truth is more important than the worry of hurting another person’s feelings. This doesn’t mean you can go voice all your negative opinions all you want; it only means that when a situation requires that you tell the truth, you tell it. Period.

Genuine people don’t try to sugarcoat to save someone’s feelings; they also don’t have to make up lies to try and cover up someone’s face. They trust that people can handle the truth, that’s why they speak only the truth and there’s nothing wrong with it.

2. They admit and take full responsibility when they are wrong.

Genuine people know and accept their shortcomings without having to pretend they’re perfect. They are not afraid of being vulnerable when admitting their mistakes, and instead try to make amends.

If you are genuine, you accept who you truly are, flaws and all, that’s why you can take responsibility for all your actions and decisions.

Genuine people see their mistakes as an opportunity to grow.

Read: The Gifts of Imperfection: Let Go of Who You Think You’re Supposed to Be and Embrace Who You Are

3. They are not judgmental of other people.

They know that it’s important to be authentic and people have differences and unique journeys in life. Thus, they can let others simply be themselves without them judging. They don’t try to change others or make them act a certain way.

4.They  know how to listen.

When conversing with another person, genuine individuals focus on the message being communicated. Be present and actively listen.

Authentic living means wanting to know other people’s truths so you listen to all sides. It also means not interrupting when another person is doing the talking.

They act and talk simply the way they are. They don’t do things just to seek other people’s attention because they don’t feel like they need it at all.

Believe that you are you. Do things based on the fact that you just like to do it, period. Authentic people absolutely don’t need everyone to know about all their dealings.

6. They don’t use material things as a coverup.

7. They don’t worry about whether they are liked or not.

One key to becoming genuine is to genuinely like oneself. It doesn’t matter whether other people like you, too, or not as long as you’re confident in your skin.

Genuine people like who they are just enough so they no longer have to bother about impressing others.

They are not boastful nor overly modest, and all the time they simply put their best foot forward, and that’s it!

8. They have a healthy self-esteem.

Living life genuinely means people don’t easily threaten you because you strongly believe in your values. You also know your worth so it doesn’t affect you when another person is trying to attack you.

Genuine people are not thin-skinned or don’t easily become offended. Instead use only the positive criticisms given them in order to improve themselves. Just let other’s baseless opinions of you roll off your back.

Genuine people also don’t engage in negative self-talk. An authentic self knows it has strengths, not just weaknesses.

9. They listen to their inner voice.

They don’t just go with the flow or the trends of time. If you’re genuine, you can make decisions based on your instincts, not based on what is “cool” or what others are expecting from you.

Genuine people don’t easily pick up on “trendy things”, of course unless they genuinely like they. They are guided by their own mind when making choices.

10. They have consistent words and actions.

Their ways are always solid. Genuine individuals do what they say, and say what they do. No lies, no exaggerations, no coverups.

They set values for themselves and follow it. By doing this, they are setting up themselves as example–as their own role model.

11. They are not afraid of being vulnerable.

Today’s tough world forces us to hide our weaknesses, but genuine people know it’s okay to have imperfections and it’s perfectly normal to be vulnerable.

In fact, when you open up yourself to your fears or worries, you get to learn and grow from it. That’s what genuine people do.

12. They know how to receive/ give compliments.

People who have low self-esteem find it hard to receive as well as give compliments. Genuine people, on the other hand, can forge genuine connections via exchanging sincere compliments.

You thank someone when he/she compliments you; at the same time, you don’t hesitate telling someone the things that you appreciate about him/her.

Simply put, people who are genuine are all for the true, good stuff, because it is a reflection of who they are.