We can all probably name someone we would describe as intense. We might use different words to describe these people or even ourselves as sincere, brutally honest, moody or deeply attached. Having an intense personality is not necessarily a bad thing though.

On the Outside Looking In: Meeting an Intense Person

When we’re around certain people it can feel like walking on thin ice. Intense people have a certain vibe that can feel like a lot. They can also come across quite strong in their opinions. But intense people are not as scary as they may seem. Being involved with an intense person means they will bring more transparency to the table so you don’t need to wonder about the sincerity of what they say. They might seem a little dour at times but they’re actually a truly great ally to have.

But What if You’re the Intense One?

Ever been told to lighten up? Or to calm down? If you’ve heard that broken record before with a bit of annoyance then you might just have an intense personality. Don’t let such comments derail your motivation though. You are a driven person with a mission.

Intense people are committed to their work and goals and mean to succeed no matter the costs. Still, hearing someone tell you you’re working too hard isn’t any easier to hear. Being intense is not a bad thing. You’re a down-to-earth person committed to telling the truth.

8 Signs You Have an Intense Personality (And That It’s Okay!) 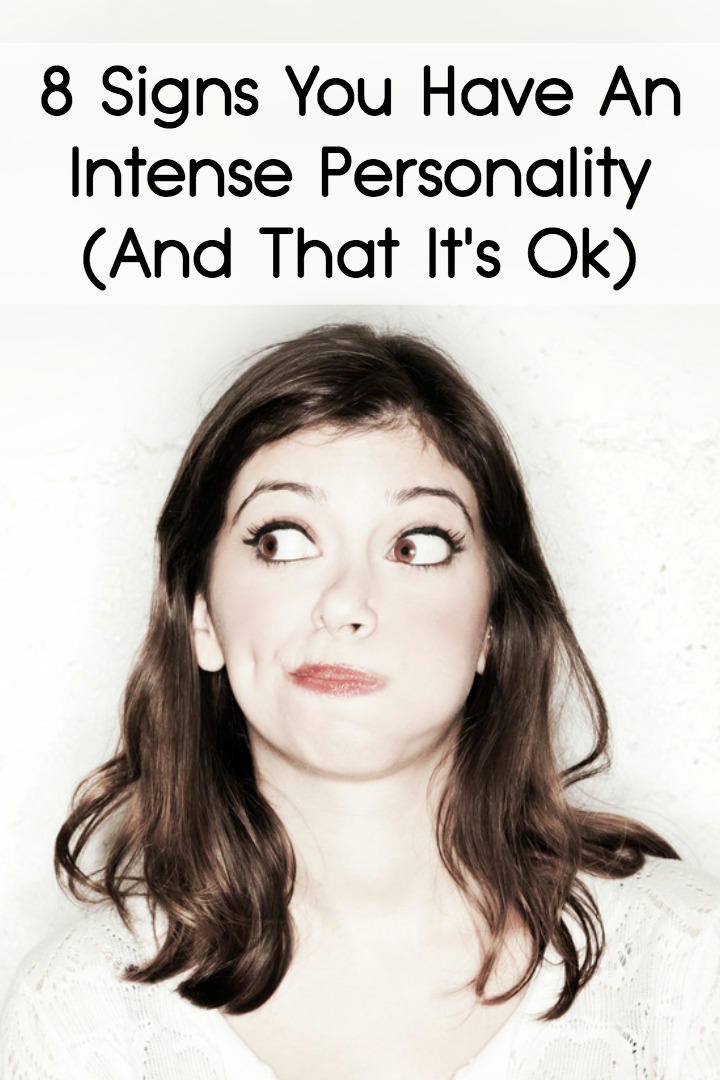 Understanding your intense personality can help you make efforts towards self-care if you find yourself overworking or pushing yourself too hard. These eight signs are traits common to owners of a strong personality, so if you see yourself reflected here consider yourself intense.

Some people can say a lot without saying anything. Not you. You mean what you say and say what you mean. Speaking with you often gets right to the heart of the matter at hand and you’re not afraid to call things how you see them, no matter what others think.

Your emotions and moods move more like a pendulum than a deep lake. One day you may have a deep chat with someone and the next day not even have the time of day for them or maybe, just not as much time as the day before. Your emotions tend to set your moods, which change often.

3. You Are Easily Invested in Fictional Characters

When you get engrossed in a book, movie or TV show you begin to empathize with a character. You feel what they feel and it affects you to the core. You may find yourself thinking about a character’s death or sorrow days after seeing or reading it.

4. Your Heart is Stitched to Your Sleeve

You own your emotions. You don’t care who knows what you really feel, and you don’t hide them. When it comes to expressing yourself you’re blunt (what some would term “brutally honest”), which can rub some people the wrong way. But you feel the way you do; why sugarcoat it?

5. You Use Strong Language

You tend to go into descriptive detail about how you feel rather than making a vague, generalized statement. You want to be as clear as possible and if strong language lets you express that, go for it. Again, it may rub others the wrong way, but you don’t mind if your options bother them.

Direct eye contact can be intimidating. But you realize that it is a valuable part of clearly communicating yourself and giving the same respect to another person. You look people in the eye when dealing with them, which can make them feel both vulnerable and creeped out.

7. You Relish in Meaningful Conversations

Small talk holds no interest for you. Talk about deeper subjects, such as politics, spirituality or philosophy bring out the best in you. In that same vein you’re not afraid to bring up uncomfortable topics to get there. Any topic is up for discussion with you and you enjoy it.

8. “Clingy” Has Been Used to Describe You

Really, you just care deeply. Has a past relationship ever called you “clingy?” As a person who is very poignant with your emotions you tend to express yourself. A lot. Seeing this much raw emotion from you can sometimes frighten others, but you’re just expressing yourself. You need an outlet for those emotions, and what better way than to tell that person exactly how you feel?