Science Shows Why Silence Is Really Important to Your Brain

Many people spend a good portion of their daily life in environments filled with constant sound. This causes many individuals to seek out places where they can experience silence. But did you know that time spent in silence this has a positive impact on a person’s emotions.

Research is showing that spending time in silence is much more important to a person’s brain than many of us realize.

9 Things Happen When You Spend More Time in Silence 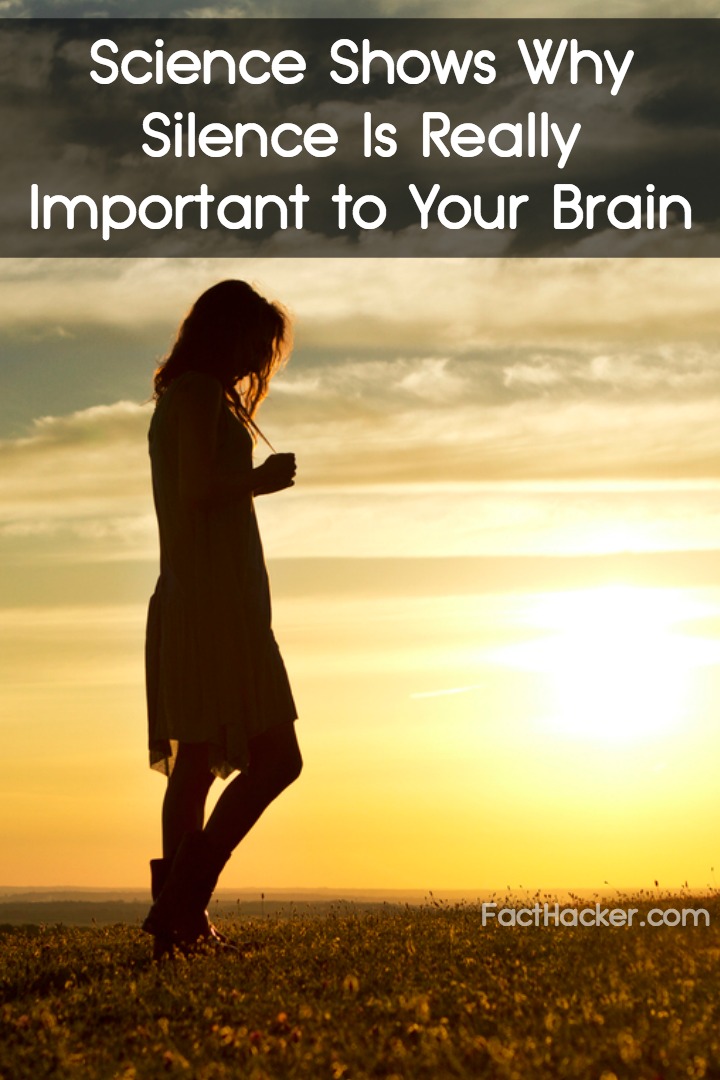 A paper written by environmental psychologist Dr. Craig Zimrig noted that infants in a neonatal intensive care unit had a negative reaction to high noise levels. It caused them to have increased heart rates and increased blood pressure. It also caused them to experience disrupted sleep patterns.

Another study was published in the journal Heart. It demonstrated how two minutes of silence was more effective in relaxing people than listening to relaxing music. This was measured by changes in their blood pressure as well as the amount of blood circulating to their brains.

When individuals are not being distracted by noise or performing tasks, a quiet time enables their conscious to better process thoughts and ideas. When they experience silence, a person’s brain is able to work at better understanding their internal and external environments.

A study was published by the journal Brain, Structure, and Function in 2013. It compared the impact of ambient noise and silence on the brains of mice. Researchers discovered that providing mice with at least two hours of silence each day made it possible for the rodents to develop new cells in the hippocampus region of their brains.

This is the area of the brain that controls memory, emotion, and learning. Scientists believe silence could play a role in being therapeutic for conditions like Alzheimer’s and depression.

This is the belief that a person’s brain is able to restore its finite cognitive resources by spending time in environments with low levels of sensory input. Research has shown the constant attention demands of the modern life puts stress on a person’s prefrontal cortex.

This is the part of the brain responsible for making decisions, solving problems and more. When a person spends time alone in silence, their brains are able to relax and not focus so much on absorbing sensory input.

It has been proven that noise has a profound physical effect on a person’s brain. It results in increased levels of stress hormones being released. Sound waves reach a person’s brain as electrical signals.

A person’s brain will react to noise even it they are sleeping. Individuals who live in environments with high levels of noise are shown to have high levels of stress hormones. This also causes people to ignore all types of noise including speech and warning sounds.

When a person spends time in silence, their mind has an increased ability to focus on things that are important to them.

Research has shown that people’s minds will first react to sounds and struggle to focus on tasks. When a person is in a quiet environment, their ability to maintain their focus and successfully complete tasks increases.

It is important for people to get free from distractions that keep them in the shallow surface of their mind. The default mode network is the part of a person’s brain that enables them to engage in self-generated cognition. This is when a person’s mind wanders and fantasizes, meditates or just plain daydreams. This happens when a person’s brain is relaxed and can remove itself from external stimulation.

Doing this makes it possible for a person to become more aware of their deepest emotions, thoughts, ideas and memories. This is what helps people to understand their life experiences as well as be creative, reflect on their emotions and more.

Studies have shown that noise has a negative effect on people’s performance in school and at work. This can result in a decrease in motivation and an increase in making mistakes while performing tasks. The cognitive functions of a brain most affected by noise are problem-solving, reading, attention and memory.

Research was done on children with homes that have high noise levels such as living near railways, airplane flight paths and highways. These children scored lower when it came to reading. They were also slower with the development of their cognitive abilities and language skills.

When a person is exposed to constant noise, the part of their brain that controls fight or flight reaction is on heightened alert. This is also a way a person ignores and hides from their negative emotions.

Psychologists have had success with their patients sitting in silence and thinking about their negative emotions. It is believed doing this enables a person to process their emotions objectively.