If You Do Any of These 12 Things, You Might be a Genius

People often equate having a high IQ as being a genius. Yet, this is only one factor out of many that separates those with superior intelligence from the rest of the population. In fact, many people are often surprised to find that a person can still be a genius despite performing poorly on academic tests.

This is because other characteristics such as behavior patterns and personality traits all play a role in a person’s ability to demonstrate their genius level of knowledge. While you may not picture yourself as a genius, you could in fact be one if any of these things ring true. 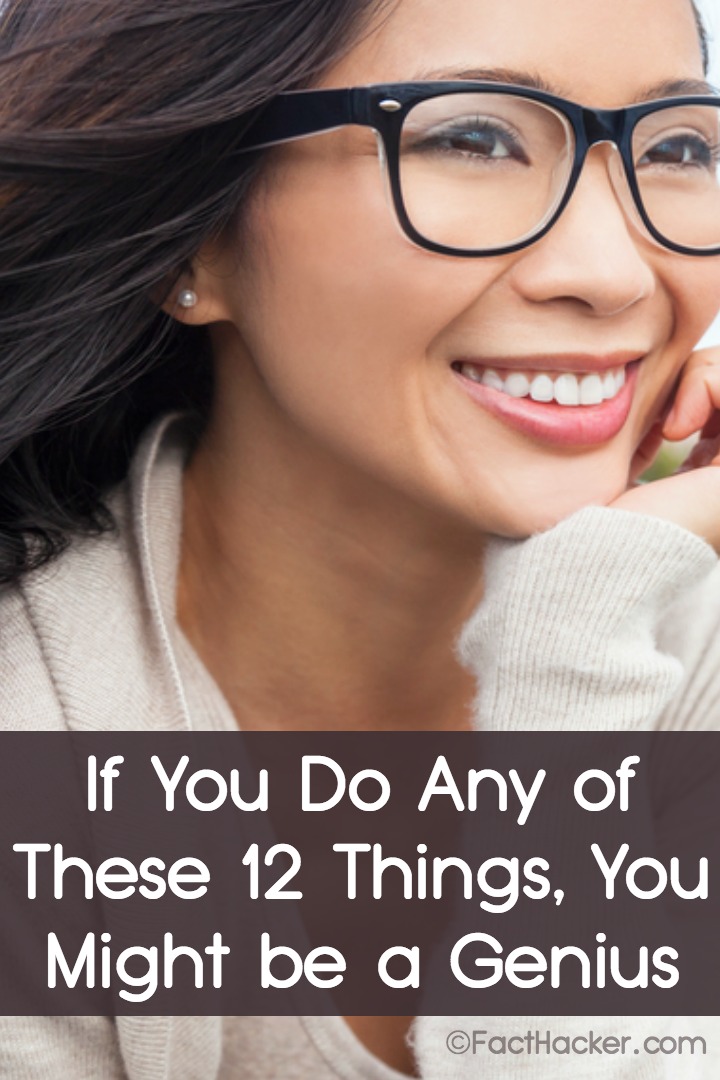 1. An Extreme Sense of Curiosity

There are those who prefer not to know about certain things, and then there are those who must read every book, watch every newscast and research new concepts online until all of their questions have been answered.

If you fall into the latter category, then your insatiable curiosity about the world is a major trait that all geniuses share.

The stereotype is true. Geniuses love to read, and they often cannot put down a book, go to sleep or do anything else until the last page has been turned.

It also doesn’t matter what your preferred reading material – it doesn’t have to be books. Geniuses will ready anything they can get their hands on. From nonfiction books, to blogs to newspapers your thirst for reading is a sign of genius.

The wheels are always turning in a genius’s head, and many people with high intelligence prefer working well into the late night hours since it means they will not be disturbed. It is also believed that technology has added to this nocturnal habit by causing geniuses to use their devices to feed their need for knowledge rather than notice when darkness falls.

A genius has a high awareness of the world that begins in childhood. While comprehending world news early on is a wonderful thing, it can also lead to obsessive thinking and chronic worry. If you find yourself obsessing over things such as international politics or just your financial future, then that may be your genius thinking going haywire.

Overthinking is a genius’s nemesis, and being able to see every possible angle of a situation often leads to self-doubt. Do you spend large amounts of time stressing over a decision that other people would make in a snap? Discovering that there is a constant debate going on in your head simply means that you are open minded enough to explore every possibility. Just don’t get stalled by second guessing every decision.

6. Forgetfulness is Your Forté

At some point, you may have questioned your intelligence after finding your keys in the refrigerator. Again. Geniuses are constantly filling their mind up with abstract concepts, which leave little room for the mundane day-to-day kinds of things. Remember, Einstein used to get lost while walking to his own home. Absentmindedness is just another hallmark sign of high intelligence.

7. You’ve Got a Colorful History

True geniuses may shine in the classroom, but they are rarely the picture of perfection. Due to a combination of curiosity, stress and social anxiety, geniuses are more likely to experiment with drugs and alcohol than their peers. Addiction is common among high achievers, and they are more likely to challenge rules that don’t appeal to their rationale.

8. Brain Teasers Are Your Escape

Some people turn to social media or television for relaxation, but not geniuses. Instead, you may have a crossword puzzle tucked into your book bag, or you cannot get enough of those online IQ tests. Brain games are just another way that you challenge your intellect, and you are constantly outdoing yourself with each new test.

Once your mind gets started on something, you will dedicate all of your focus to figuring it out. This often means talking yourself through a problem, or muttering out loud a few potential solutions. Due to your intense thoughts, you probably won’t even notice that you are blurting them out.

You know there is nothing wrong with dogs, but you cannot imagine spending so much time comforting your pet. Instead, cats fit your introverted personality, and you love that your pet prefers independence.

11. Witty (or Even Sarcastic) Comments Are Your Trademark

Witty zingers have never been a problem for you, except when it tramples on someone else’s delicate feelings. While the debate still rages on regarding the reasons why geniuses are so sarcastic, the best reason found so far is that it is linked to their creativity. Since you tend to think outside of the box already, coming up with some snide remark is just par for the course.

12. You Have Social Anxiety

The same personality traits that contribute to high intelligence also make it harder for you to feel comfortable in social situations. This is because your natural instinct is to take in and analyze every bit of information around you.

This can lead to you constantly questioning the impression you are making and how others respond. Add in your introversion, and it is no wonder you would rather be home reading than at the latest party. Recognizing this as just another characteristic of being a genius makes it a little easier to accept that it is part of what makes you so unique.

Share5K
Pin37
Tweet
5K Shares
‹ Minimalism: When Less is More (And Why You Might Want to Try It) › 10 Most Common Flowers and Their Meanings