10 Most Common Flowers and Their Meanings

What Is the Meaning of Your Favorite Flower?

We send flowers to convey many different emotion-filled messages. When we choose the flowers for the bouquet, we choose what the recipient likes, what looks lovely together, or what the florist suggests. However, during the Victorian age, people in England, Europe, and the United States used a language of flowers to send messages that could equal handwritten notes.

Our Emotional Attachment to Flowers 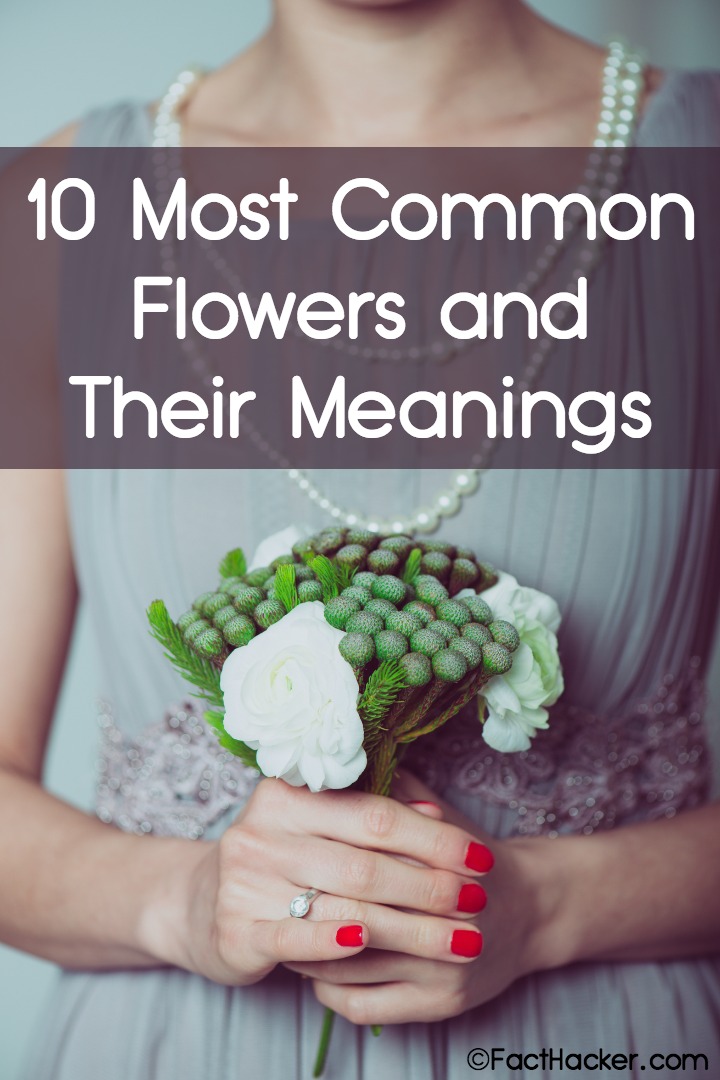 From a strictly utilitarian stand point, though, when you consider the flowers of plants that produce no food, medicines, or dyes for humans, you might wonder why humans have continued to cultivate flowers right along with food producing plants for over 5,000 years, even when resources were meager and having food meant survival.

A study entitled The Emotional Impact of Flowers, was led by Jeanette Haviland-Jones of the Department of Psychology at Rutgers — the State University of New Jersey.

It was published in Evolutionary Psychology in 2005 and suggests that the way that the beauty and fragrance of flowers lift our spirits actually may serve flowers as an emotionally positive evolutionary survival strategy in the same way that a frightening appearance or a repulsive scent, taste, or appearance serve other plants and animals as an emotionally negative survival strategy.

The details of the study are listed at the end of this article.

The Symbolic Meanings of Flowers

If you would like to send a bouquet of flowers that can be read as a note, the meanings of some popular flowers are included below:

Orchids connoted virility in ancient Greece, and they continue to symbolize strength, but they have also come to represent luxury and beauty.

Magnolias praise nobility, dignity, and perseverance, and honor a love of nature.

Anemones send a message of anticipation but fading hope and a fear of being forsaken.

Asters symbolize dainty elegance, but also speak of a love of variety and patience.

Alstromeria offer friendship with wishes for fortune, wealth, and prosperity.

The Emotional Impact of Flowers Study

Haviland-Jones divided her study into three parts to separately test and develop each part of her theory.

In the first segment, women were presented with either a bouquet consisting of a popular assortment of flowers; a large gift basket of fruits and sweets, representing food; or a large, scented column candle with three wicks sitting on a stand, representing light and warmth.

The field notes made by the experimenters suggest that the latter group were disappointed that they were not offered daisies.

The third segment of the study involved senior retirees and was conducted over two weeks. All groups received one bouquet identical to the one used in the first study. After receiving the bouquet of assorted flowers at the beginning of the first week, one group received a second bouquet of assorted yellow flowers at the beginning of the second week.

So, the study strongly suggests that we humans do have a strong, beneficial, emotional attachment to flowers that encourages us to keep them around and share them.

Share2K
Pin2K
Tweet
3K Shares
‹ If You Do Any of These 12 Things, You Might be a Genius › Here’s What You Need To Know If The Sound Of Chewing Drives You Crazy